Ray Konopka rumored to be working on FireMonkey components.

This is not an article about LiveBinding. I was once hoping it was going to be, but instead it has become an alternative to LiveBinding. If anything, it is about compile-time binding and quality assuring the data input from of your users.

How many forms have you created?  Chance is – quite a few – and what do they have in common?   If people type rubbish, your data becomes rubbish.  So – what do you do?  You validate the input to prevent rubbish getting into the system.  You do… don’t you? Sure you do!

When do you validate it?  When someone clicks Submit or OK?  Right – then you have to go through the input, field by field, and first ensure that what the user typed in actually is understandable in the current context – such as no funny characters in an integer – and sometimes you have to check  the values against each other for logical states. If someone said they took three melons, their combined weight should at least be bigger than zero, and blue shirts don’t go well with pink pants, and what else not.

If the user typed in rubbish – you have to inform him or her so that it can be corrected.

Been there, done that

There is a certain amount of logic in this scene that we keep recreating scaffolding for.  Stuffing things into listboxes, formatting and filling in the values, validation of numbers and dates, converting enumerated types into strings (and back again). If you want the dialog to be slick – you might even want to validate as you go, which means eventhandlers for focus changes, keys pressed, UI items clicked, dropped down and selected, also adding to all the scaffolding code.

Some time ago, I had to create yet another dialog.  Lines and lines of housekeeping code that surround the real validation logic.  And naturally I don’t have to be clearvoyant to foresee numerous more such dialogs, as it is a major part of writing applications that deal with configuration, input and control.

So – I thought to myself – can I spend a little time now, and save a lot of time later?  Dangerous, innit, thinking like that…  suddenly you could find yourself writing a framework, and we all know what happens to frameworks, right?  They turn to endless amounts of code written with good intentions of handling the unexpected, covering functionality you won’t ever need, and at some point collapse on themselves to become a black hole of sketchily documented (since noone updated the docs as new features got added) , and hastily changed (since you always are in a hurry for that extra functionality) code.  And when someone else misread your framework intentions and applied it like a hammer to a screw – it just doesn’t end well.

Narrowing down the scope

Hence – Sticking with the KISS principle, I have decided to try to make it independent of other libraries, and limit what I implement to basic functionality while attempting to allow for future expansion.

I am going to create a TInput that wraps a GUI control.  To put it simply – a TInput that points to a specific TEdit, and takes care of stuffing values from the variable and into the GUI control, and vice versa.  The job of that TInput is the present the value correctly, and to ensure that what ever is written into that TEdit, can be converted into an integer.

I will also create a TInputList that is a collection of TInputs, that will have the job of going through the list to fill the controls, to validate the contents, and finally – if all input is syntactically correct – semantically validate the input for logical correctness.

Some of the code that I will present here, is probably centric to the type of data that I work on.  For me, an input form will  typically wrap an object with a set of properties that reflect a row or set of related rows in a database.  Why am I not using data aware controls?  Mostly because the applications we create actually can’t write to the database themselves, except through calling stored procedures that perform more magic before, during, or after the data has been written.  For that reason, the TInputList will be a TInputList, and the TInputList will have a property Current:T that I can populate, and each TInput will know that it is member of a TInputList, so that it can kick of the necessary actions for stuff to get validated.

By now you have probably thought to yourself: TEdit?  What about the other controls?

Because there are a number of input types, and a number of controls, and these make a number of combinations. TEdit/Double, TEdit/Integer, TEdit/String, and TEdit/Enum is already a list, and I haven’t even mentioned TComboBox yet,- so it is obvious that TInputList has to be polymorphic.

This brings us to the first part of complicated – creating a set of generic and polymorphic classes.  Generics in Delphi XE still don’t to well with forward declarations, and to create polymorphic parent/children lists, it really helps to be able to forward declare.

From the outside of the list, we need TInput that expose the correct type that we want to access, so that will be our outer base class type – which knows how to set and get the value, and hence the class that we use to reference an input field.

Please note that this is a simplified view of TInput class.

Inside TInputList, I will subclass TInput again, and add knowledge of the controls.  In fact, I will create several subclasses that handle type conversions for each data type and control type, but instead of having the user instantiate all these different class types – I will add factory methods to the TInputList instead.

Here are some excerpts from the declaration of TInputList and the basic control wrapper.

This is the second part of complicated. Will I be using the XE2 LiveBinding? No. IMO, LiveBinding uses the least desirable method to bind a property for setting and getting. I lamented this in my previous article, Finding yourself in a property bind. In my opinion, LiveBinding is a good idea that is implemented in the wrong way, and in it’s current form will be vulnerable to property and variable name changes during refactoring. In addition, it appears that LiveBinding is not quite mature yet. Then there is the fact that XE and older, doesn’t have LiveBinding.

After some experimentation, I came to the conclusion that even if it appears to be more elegant to use visitors or observers and RTTI binding, I will get more flexibility, readability, and maintainability by using anonymous methods.

Anonymous methods allow me to do manipulation of the value before it is set/get, and allow the setter/getter events to have side effects. It also ensures that all references are validated compile-time. It will not guarantee protection from referencing the wrong properties and variables, but they will at least be of the right type, and actually exist.

Since my primary development platform is Windows, I am a VCL developer – and when I started this little project, I had only VCL in mind. However, as the code matured, I found that I might want to be able to use this for FireMonkey as well. That still remains to be seen as FireMonkey still smell of Baboon.

Still, the core logic is platform agnostic, and the VCL bits are separated into a unit of their own.

Here is an excerpt from the VCL implementation with complete declarations.

Putting it to use

This will be covered in part 2. Until then, don’t forget to try out RAD Studio XE2 and join the RAD Studio World Tour presentations!

Published with permission from Embarcadero.

When you start out a new simplistic GUI project in VCL or FireMonkey (FMX) in XE2, you will notice a few differences from older Delphi versions. XE2 introduce consistent use of unit scope prefixes. The Windows related units are grouped under the Winapi prefix, and the VCL units under VCL. FireMonkey has been given the short prefix FMX.

As you can see – the basic generated skeleton code is quite similar between the two frameworks.
Apart from referring different framework units, the resource include statement is also different: “*.dfm” vs “*.fmx”.

This is a FireMonkey HD project.

The designers are fairly similar between the frameworks, but there are differences.
The good old VCL 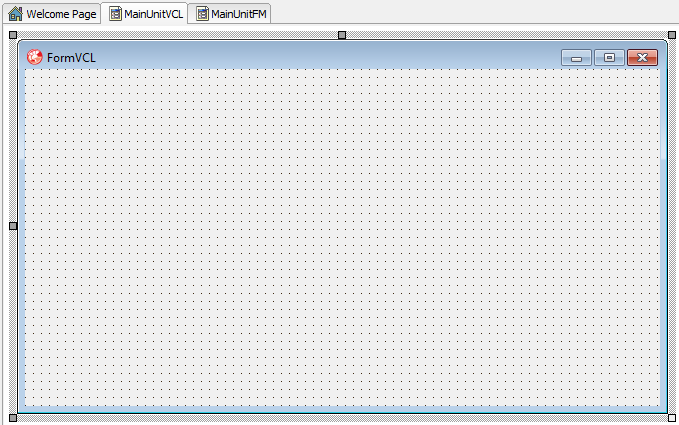 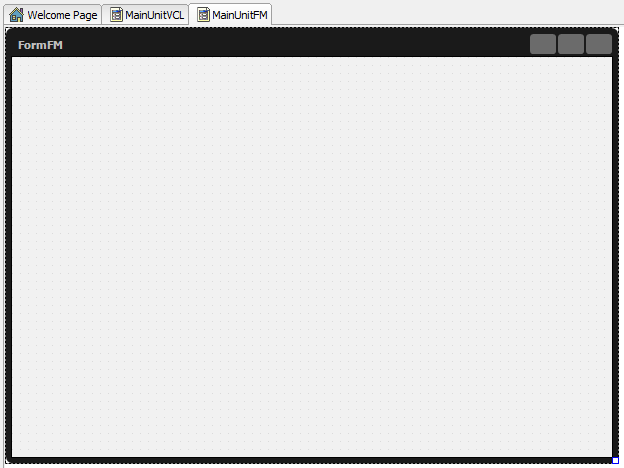 If you are wondering what’s up with the drab grey look, you can relax. This is the designer look, not the run time look. FMX adopts to the theme of the OS it is running on – so it will look like a Windows app on Windows, and as a OSX app on OSX.

Let’s take a quick look at the properties of the standard form. 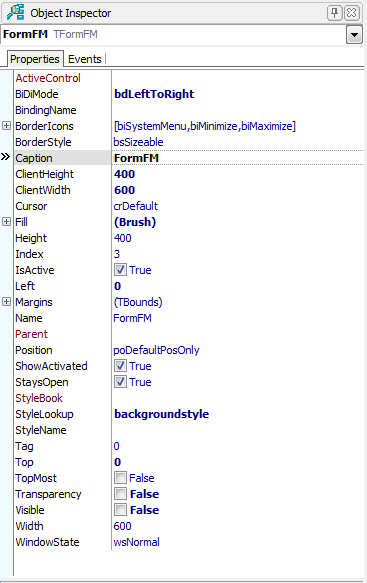 We are clearly not in Kansas anymore. FMX is a completely different framework, and it has been designed with cross platform in mind, unlike VCL which was designed to wrap Windows controls. This means we can look forward to learning new tricks, which some of us will view as a plus, while others will sigh and mutter something about things being better before.

Porting a project from VCL to FMX is more work than recreating the form in the FMX designer, hooking up the new event handlers, and pasting in code from the VCL project.

I added some standard controls to both forms. 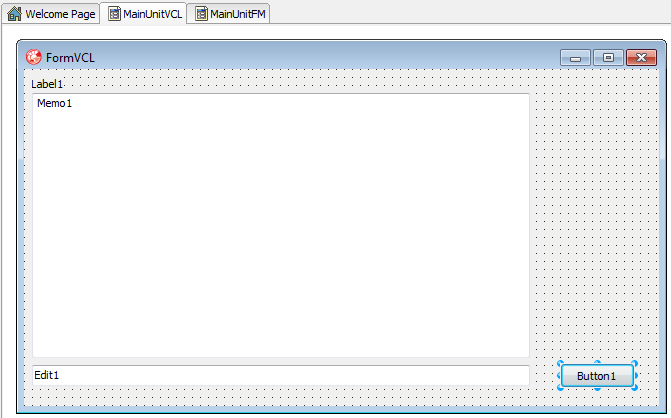 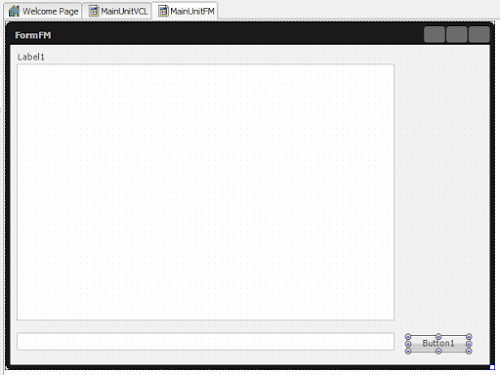 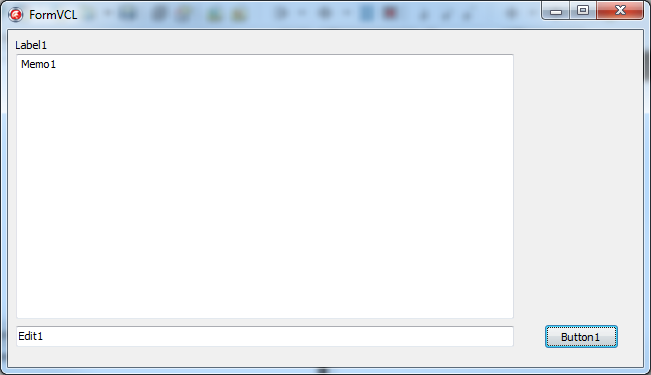 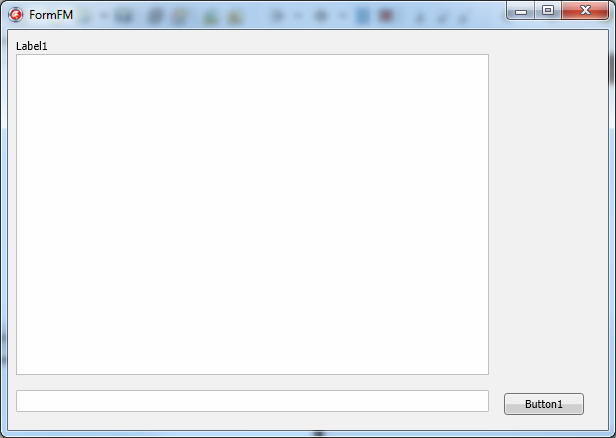 As you can see – although similar in many ways – there are many differences between VCL and FMX. One example: TLabel.Caption is no more. TLabel.Text is the correct property under FMX.

Then there is the glaring fact that FMX HD will build for OSX as well as both 32 and 64-bit Windows 🙂 Alas – since I don’t have a Mac, I can’t show you the OSX version. 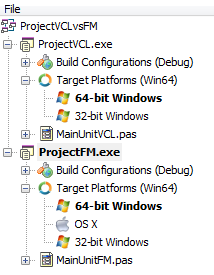 How do the form resources look?

FMX is made for scaling, and it also have numerous other nifty features such as rotation.

This was just a very shallow outline of some of the differences between VCL and FMX, but it is perhaps enough food for thought to make you realize that you most likely will have to put some effort into moving from VCL to FMX. In some cases, you can get away with minor adjustments, but when it comes to sophisticated GUI – or stuff that is based on Windows functions – you will need to rewrite parts of your code. 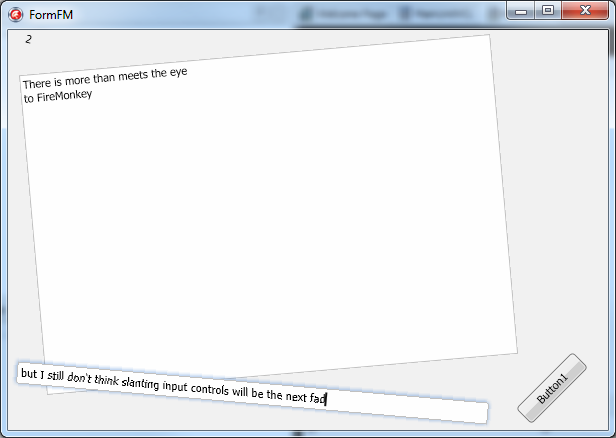 Don’t forget to visit http://www.embarcadero.com/world-tour to register for the RAD Studio XE2 World Tour event near you!

Published with permission from Embarcadero.

The Embarcadero RAD Studio XE2 World Tour is upon us.

The features are shiny! The reviews will be rave! As a Delphi developer, your favorite toolbox is about to get a massive upgrade that you don’t want to miss!

Click on the banner up top or down at the bottom of the blog to sign up for an event near you.

One of the new features is cross platform support.

On the long awaited end – your new Delphi will be able to do your old Windows 32-bit platform, and now also will compile your VCL applications to native 64-bit. Note that VCL will still be Windows Only. You may have to do a little fixing to your code, as Integer still is 32-bit but Pointer is 64-bit – so those old Pointer(Integer) casts will have to be reworked.

The most exiting feature of XE2 is that you can create GUIs for other platforms as well!
To enable this – Embarcadero nabbed the guy behind VGScene and DXScene and created FireMonkey – a whole new GUI framework that supports Windows, OSX and iOS in Delphi XE2, and that will (warning – speculation) very likely add support for other OS platforms in future versions of RAD Studio.

Over the coming days I predict heavy blog activity with a lot to read about the new RAD Studio XE2 release, but in the mean time – make sure to sign up for the RAD Studio XE2 World Tour events!